The tall grass in the river flowing by 7 Rivers Farm here in South Africa produces seeds, which local girls are turning into beaded jewelry for sale locally and overseas.

The Zulu call these chwabasi beads; in some places they are called imfibinga. They come in different shades of brown and gray, and we combine them with glass beads to make some absolutely stunning necklaces, bracelets, and now the latest addition ~ ear-rings.:) 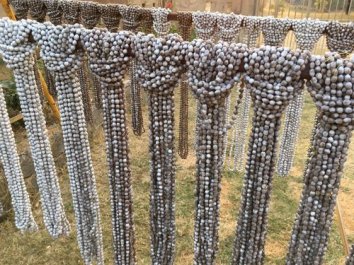 Our girls are learning a job skill, making an income, and learning budgeting as well. The Bead Shop, begun in January of 2017, is the first job-skills development project implemented at 7 Rivers, and hopefully the first of many to come.

I am so excited to see these local women using local resources to create things that can be sold all over the world, and earn an income in the process. Cherise Smith has come up with some beautiful designs that the local girls are creating. Check out the Bead Shop link. 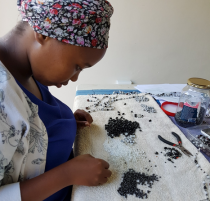 But the training wasn’t easy at the beginning. Many of the ladies struggled with counting, with getting the repeating pattern correct, and with getting the lengths uniform. Often, necklaces had to be broken up; they had to start all over again. They needed to count and recount carefully; to consider and reconsider carefully.

We Need to Count and Recount

Counting reminds me of the discipline of being th(i)nkful. I have to learn to stop and count, not something I am making, but what God is making of me. There are light beads – I need to count my blessings. There are dark beads – I need to count it joy when I have trials. This mixture of bright and dark, of drab and colorful, is what makes a beautiful necklace. And what makes a beautiful life.

Recounting reminds me of taking the time to thoughtfully consider what God has done in me over time. Yes, I count as the days go by, but perhaps at Thanksgiving, or at the New Year, or on an anniversary, it is good for me to recount – to replay, reconsider, analyze and synthesize – what God is doing; to be thankful for the bigger picture He is revealing. 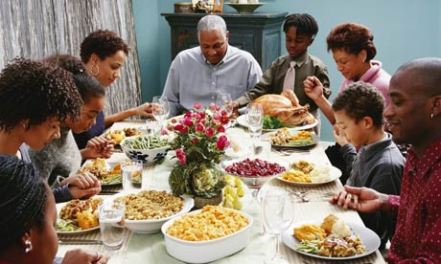 This week is Thanksgiving week in the States. Families are usually trying to get together. There will be good food and times of giving thanks. Churches will often spend a service recounting thanks to God for what He is and what He has done.

In our home, we would have a thanksgiving scripture printed on a card for each person at their place setting that they could read orally between dinner and dessert and then share a thing they were thankful for.

But it doesn’t require a national holiday to recount our thanks to the Lord. Every morning when you wake, your mind can recount God’s wonderful deeds – just that you actually woke up. That is a good start. You have been given the gift of another day!

I choose to give thanks.

One of the reasons David the Psalmist was a man after God’s own heart is that he recounted the wondrous deeds of God. A Psalm often begins with him pouring out his fears and frustrations to the Lord … and then midway through, he begins to get God’s perspective on life and what is going on in his circumstances. He starts to recount the steadfast character of God and His blessings on us, His children. 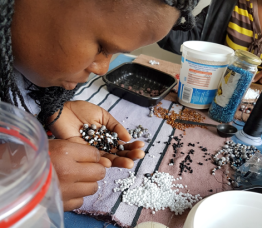 Let’s pretend we are threading a th(i)nkful necklace with the 7 Rivers ladies. And let’s say that there are 7 beads in a set that we need to repeat to eventually make into a lovely necklace. Here are the 7 beads – repeat them 10 times:

Just as the precious Zulu ladies count and recount their chwabasi beads to get it just right, we should be counting and recounting the blessings of our Creator.

The Christian Captain from the Townships

What’s just as noteworthy is that our first black captain, Siya Kolisi, led the team to the top. He is a Jesus-follower and rose from very humble beginnings.

In the old Apartheid South Africa (1948-1992), white people lived in the suburbs and worked in the cities. Blacks lived segregated in “townships” ringing the cities – places of poverty and crime, tiny homes and tin shacks crammed close together, poor public services, and dismal education.

Siya grew up in the Zwide township of Port Elizabeth, South Africa.  He was raised by his grandmother and was often unsure if he would have anything to eat during the day.  His favorite toy was a brick.

Reflecting on his childhood, Siya insists he was given the most important things in life – “love and support.” He frequently uses the word “tough” to describe his childhood, yet admits he didn’t realize it was so hard at the time; it was simply all he knew. 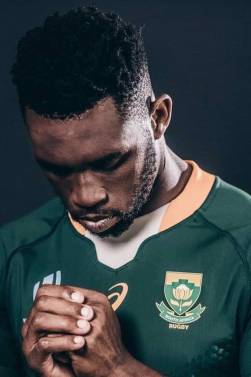 He “fell off the wagon” a bit during his teen years even though he identified himself as a Christian. Eventually, he chose to be grateful for what he had, and began to work hard.

“While struggling with a lot of things personally — temptations, sins and lifestyle choices — I realized I wasn’t living according to what I was calling myself: a follower of Christ. I was getting by, but I hadn’t decided to fully commit myself to Jesus Christ and start living according to His way.

Walking alongside a spiritual mentor, I’ve been able to discover the truth and saving power of Christ in a whole new way. This new life has given me a peace in my heart I’d never experienced before. I don’t have to understand everything in life, and there are so many things I don’t, but I know God is in control of it all. My job is to do the best I can and leave the rest in His hands.”  – Siya Kolisi

Many people here consider this a struggle. Due to systemic corruption, unmanageable debt, the collapse of the electrical grid, and chronic crime, thousands of skilled South Africans are emigrating every month because they see a collapse coming.  About 15% of the houses on the market now are families leaving.

In a recent sermon series on a scriptural view of emigration, Pastor Des Venter spoke frankly about contentment. Contentment is wanting what you already have. It is focusing on and celebrating the good things in your God-given status quo.  He said we will not be content in another place if we have not learned to be content with our present place. Contentment comes from within.

Paul wrote in Philippians 4:11-13 that he had learned to be content in whatever situation he was in. He had learned how to be poor and how to cope with an abundance of funds. He had learned the secret of facing plenty and hunger, abundance and need. Outside circumstances were beside the point; he could do all things through Christ who strengthened him.

When you begin to incorporate thinking thanks about your present reality, you foster contentment in your ‘now.’ Many of us are problem-solvers; the downside of that is that we find no rest in our spirit until our issues are sorted out. Stopping for a minute and thinking thanks adds weight to the positive side of the scale and brings you back toward balance.

In expressing gratitude, your circumstances do not change, your mindset does.

Many South Africans are feeling much better about their country … simply because we won the rugby world cup. Why is that? Because we finally had something positive to focus on, and with hearts of gratitude, our outlook on our other and greater challenges somehow seems more positive.

Choosing to speak out and write down your thankfulness in the midst of hardships takes both hard work and a work of God’s grace. The Lord begins to knit your expressions of thanks into a beautiful creation that only He could provide the fortitude to accomplish.

“… Giving thanks always and for everything to God the Father in the name of our Lord Jesus Christ.”  Ephesians 5:20

The Choice of Gratitude

“For every Joni Eareckson Tada or Corrie ten Boom, there are countless others whose names and stories few have ever heard, who endure the worst that life has to offer and still come up thankful. Not unscarred, not unmoved, not functioning out of reality like robots, but still spotting reasons for hope and promise. They seem to know that the only thing more debilitating than what they’re going through would be going through it ungratefully.

No, the days don’t always get easier. The nights can still drag until utter exhaustion finally pulls a person under for a few hours’ sleep. But those who say “No” to resentment and “Yes” to gratitude, even in the face of excruciating pain, incomprehensible loss, and ongoing adversity, are the ones who really survive. They stand against the tide of memories, threats, loss, and sadness, and answer back. With gratitude.”

From Choosing Gratitude: Your Journey to Joy
By Nancy Leigh DeMoss 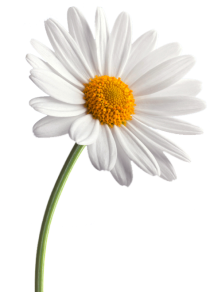